Why Nature Holds the Power of Epiphany

Ask anyone who has spent more than a week rafting the Grand Canyon and they will tell you the experience will change your life.

It’s hard not to perk up when someone says this, right??! 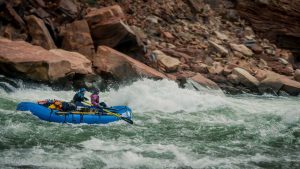 The first person who shared this secret with me was the guy who taught the whitewater-rafting course I took when becoming a guide back in 2014.

His eyes got that faraway look, as if describing a past lover. Then he started talking about the rhythms that life melts into when you wake with the sun, paddle and sweat and swim during the day, then cook a big cowboy supper, and eat while the night sky climbs and into the slit of emptiness between the two canyon walls. He talked about the hardships, too. Of peeing in jars (because so many people visit the Canyon every year, nobody can pee on the land or else the whole place would smell like a New York City subway) and packing up your camp toilet daily and stashing it on a raft. And of the injuries and dangers of paddling Class 8 and rapids (East Coast rapids are rated Class I – V, but for some reason, the Grand Canyon uses a scale between 1 – 10.)

As soon as I heard him talk of the beauty, the danger, the solitude—I was hooked. I knew I had to go.

I got my first chance in 2016. A friend I didn’t know well at all posted that she and her crew were launching a trip in January. Half joking, I asked if she had room for one more. She did. And that trip was amazing. 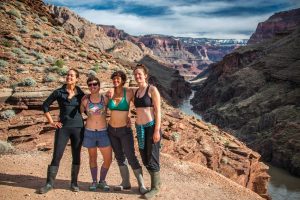 Hiking a side canyon of the Colorado River.

But not as amazing as I went back this past January. Our trip organizer entered the lottery asking for 21 days in the Canyon (25 is the maximum a non-commercial oar trip is allowed). Three weeks with no phone, no electricity, no work.

The trip was hard. A snowstorm blanketed us as we made dinner one night. The fast drop in temperature had my nose running so much that I blew it a dozen times, washing my hands diligently each time afterward, which caused the skin on my fingertips to crack. One day, an upriver wind leaned so hard that our boats slowed nearly to a stop. We collapsed on shore, made camp and let Mother Nature howl all night long. In the morning, even though I had slept inside a zippered tent, I still awoke with red sand settled on my eyelashes and in my ears.

One thing always becomes clear in nature: I am not in control. 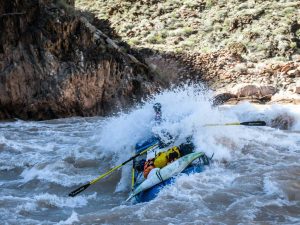 Smack! A fast lesson that I’m not in control.

Spirit is. There is no denying this truth when struggling against the elements. If it hadn’t been for the roar of the Colorado River, perhaps we would have heard God laughing as we dug our oars in and went nowhere. Even then, we all didn’t mind the slow progress as we had an abundance of Cheez-Its, peanuts and Newman-O’s. Spirit always provides.

That wind abated some, but it stayed with us for a few days. We pushed on, seeking sanctuary in side canyons, sheltered from the main highway that is the river.

One night, as a few others cooked dinner, a group of us went for a hike. And by hike, I mean we’d walked a thousand yards and then scramble up a hundred feet of piled-up boulders and then walk some more. The others in the group wanted to push on until last light, but I felt overcome by a strong urge to sit down. Not because I was tired, but because I heard a voice of inspiration tell me to. 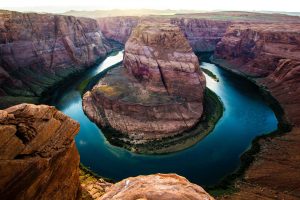 It’s hard not to find God in wild places.

And so I did. I sat in silence, meditating. I don’t close my eyes when meditating in nature. The Canyon is the most gorgeous work produced by God’s hand in the desert, and I’m utterly transfixed watching the sun, veiled by clouds, shine on and off those red walls.

Further lulling me into a trance was the wind. I live in Florida, a state where I can’t seem to recall the wind creating an epic sound. It rustles and crunches the leaves when the gray clouds fret overhead, but it’s not that echo-y full sound it is out West. There, I could hear it as a force, gaining speed like a train, powering through the Canyon. It was beautiful.

And then I heard the words, “Be still and know that I am God.” Bear in mind, I don’t read the Bible. (I’m faithful but not religious.) I’d heard this phrase before, but I never got it. It seemed like one more thing I just couldn’t ‘get’ in sobriety. Be still, blah blah blah. I’d actually found the phrase annoying, perhaps because I wasn’t in the club of people who knew what it meant. 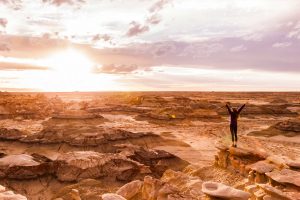 What’s more inspiring than being sober and appreciating the beauty of the outdoors?

But that day as I sat, I finally understood what it meant to be still, wanting for nothing. I felt so complete. I could just feel that Spirit had my back, guiding me to peace, and to inspiration.   I actually started crying. Which, if you know me, you know isn’t rare for me at all. But it wasn’t a sad cry. It was the cry of finding what I’d been looking for all along. Of finding home. That same feeling I had the first time I sat down with my people for an hour, as we do.

There in the Canyon, I’d never felt more secure in my entire life. It was everything I’d ever wanted.

But then my humanity crept in. I prayed for Spirit to tell me something else, to tell me more. I started clinging.

The peace began to fade, and within minutes, the rest of the group caught up with me on the path back to camp. The moment had passed.

I was disappointed that the moment had passed, but I also knew I’d tapped into something that isn’t going anywhere. Whether I sit and stare at the clouds, swim in the ocean or walk in the forest, I know what I will find. A power greater than me is always outside, waiting.